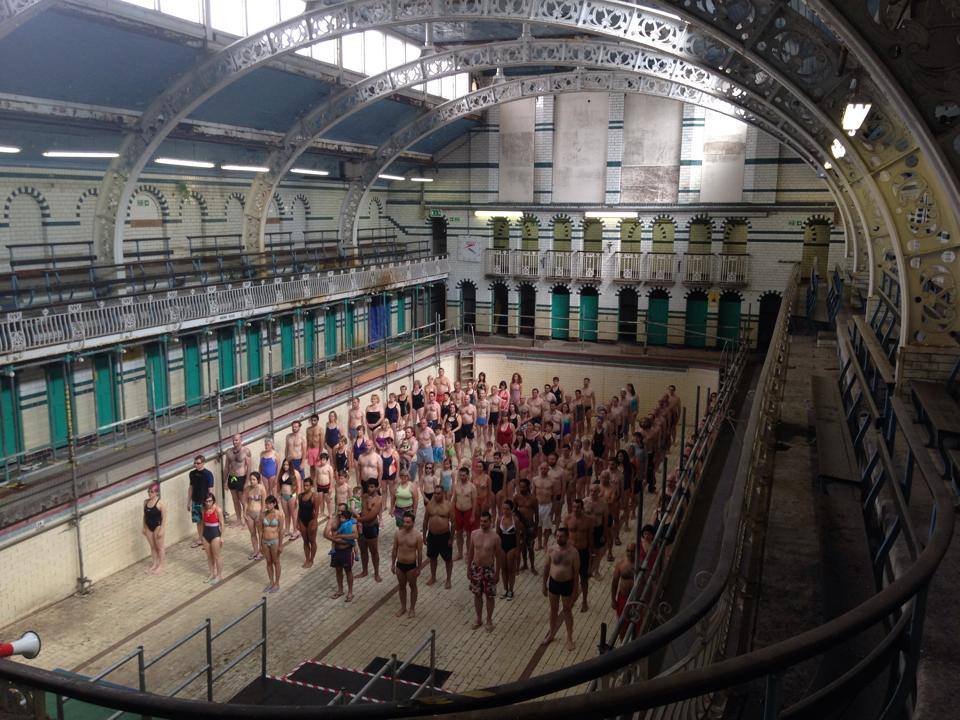 Fierce aren’t the only organisation to be using the baths as a site of inspiration!

We have had Laura Delaney and Lisa Stewart, two Australian artists on a residency in Moseley using the area and the Edwardian baths for the last week.

Then this event happened on Sunday…

An event organised by Some Cities-a city-wide social project inviting photographers of all abilities to share their images of Birmingham with the world.

See below for information from their press release:

100 SWIMMERS TAKE PART IN ONE-OFF CITY PHOTO EVENT
Over 100 swimmers from across the UK took part in a one-off photo event earlier today (Sunday 20 July), aimed at highlighting the plight of one of the Birmingham’s most important community buildings.

The 100 Swimmers, a project by photographer Attilio Fiumarella, saw the empty Gala Pool at Moseley Road Baths in Balsall Heath filled with swimmers, photography fans, city heritage enthusiasts and community supporters; a reaction to the news that Birmingham City Council intends to close the historic building permanently in 2015.

A final powerful and thought-provoking image emulating the famous Terracotta Army sculpture of Ancient China was captured, also completing a community photographic project entitled The Swimmers on show at the Old Print Works in Birmingham until Wednesday 23 July 2014.

Attilio Fiumarella is a recipient of the first Some Cities bursary scheme. He has been working to document the under-threat Grade-II Moseley Road Baths building over the past few months.