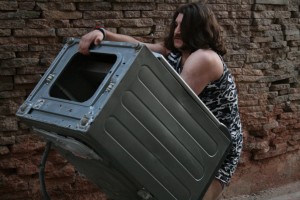 If you expected to see live dramatic performances, intellectual installations and screenings of serial cinema at PILOT which was held at the mac then you were correct, but the one thing that you would not expect to be present at PILOT was a cross dressing man who enjoyed fashioning shoulder length hair, blue dress and wedges that were elegantly duct taped to his probably size 15 feet.

Aleks Wojtulewikz showcased his enactment of both Lucia, a German-Italian woman and himself simultaneously to convey the gender relationships between the two by maneuvering a washing machine from one end of the mac’s outside surroundings to the other in this unusual attire.

On my first viewing, my impressions were set on it being an interpretation of women’s struggles whilst trying to follow two stereotypical ideas – being feminine in appearances but also being able to do the traditional tasks such as childcare, cooking, cleaning etc. But throughout further research it seems to be a representation of how male and female bodies respond to the same task.

The concept of gender stereotypes has been around for a long time and Wojtulewikz’s piece draws attention to it in an unusual and thought-provoking way.