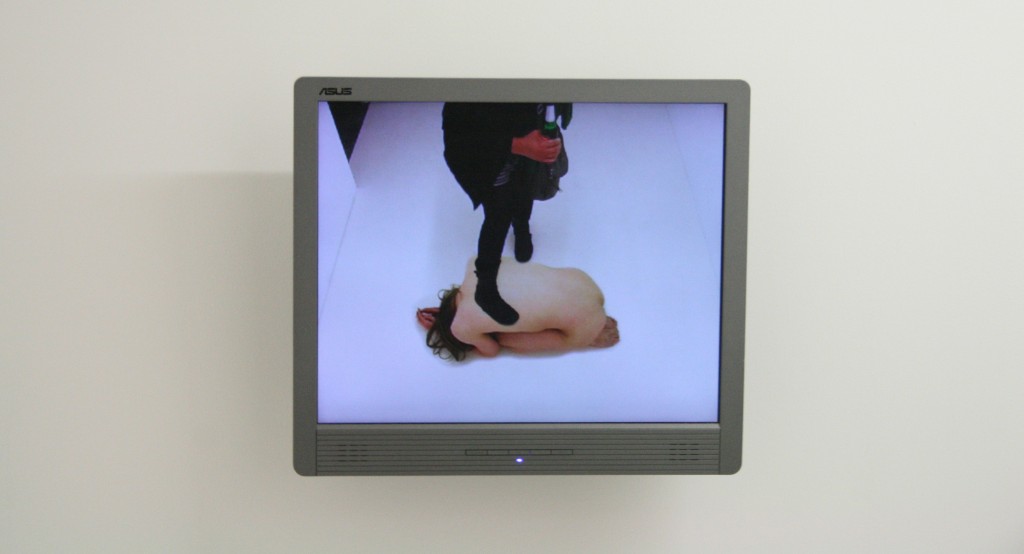 Reynir Hutber is standing in the doorway of an oppressive white cell watching a video of a young man stamping remorselessly on a quivering, naked body. Hutber’s response is surprisingly placid, considering the body is his.

This is ‘Stay Behind the Line’, one of four installations in Hutber’s exhibition of the same name. When viewers first enter the cell, they are confronted by a wall-mounted screen depicting the artist’s naked body, curled up in an otherwise blank space. To the right of the screen, a wire divides the cell in two. “I don’t know if I can cross that,” says one viewer, pointing past the divide, “I always associate that sight with ‘stop’ and ‘do not enter’.” Slowly, tentative steps are made and people begin to break the boundaries between them and Hutber’s work.

Although aggression is a common reaction, it is the other, compassionate side of human interaction that interests the artist.  “What surprises me,” says Hutber, “is how genuinely nice and affectionate some people are. It comes from a real sadness. They reach out and stroke my hair, they want to help.”

At this moment, the scene changes. A young girl walks into the cell, crosses the wire, kneels down and reaches out to take Hutber’s hand.

Ben Lewis, one of the Judges who awarded Hutber the Caitlin Art Prize in 2010, praised his work for “turning the viewer into the perpetrator”. Yet at times, they are also the friend, the carer, the cell mate. The piece is beautiful in the way that it brings out real human emotions with something so ethereal.

“The piece explores the idea that some people are invisible in society,” Hutber says, “They are stepped on and pushed around as if they don’t really exist – as if there are no consequences.”

Moments later Hutber returns to the cell in an Amnesty International sweatshirt and, without a word, makes a clear link between his work and the international suppression of human rights. The Judges of the Caitlin Art Prize praised Hutber for the piece’s political references to prisons in Iraq and Afghanistan.

And yet, there is another aspect to this exhibition. Wherever you look, signs restrict your every movement. ‘No photography’, reads one, ‘No entry’, another. “I wanted to explore our relationship with art and the way that is controlled,” says Hutber, “I was at the Tate recently and I noticed they have a new system whereby a loud beep is emitted if you get too close to the artwork.”

The impact of this exhibition lies in the detail. Everything is thought through so precisely that there is always something new to discover. Although the exhibition consists of only four artworks, some people stay for hours, taking in every detail of the hypnotic environment.

The accessibility is also impressive. “We’ve been out all day looking at exhibitions,” says one mother, watching her two children poke and prod the image of Hutber, “But this is the first one we’ve all enjoyed and got something from.”

‘Stay Behind the Line’ will be at the Grand Union in Digbeth from 17th March to 22 April, open Thursday to Sunday, 12-5pm.