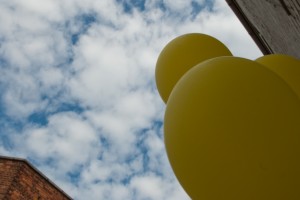 As the afternoon showers subsided, and the sun began to shine, leading the way, a trail of yellow balloons battled the June winds.

You have reached your destination, A.E. Harris, the location of The Fierce Festival Start Party, June 18th 2011.

Pick up a map and flyer from the table below and begin the journey around the space  to reveal the Fierce Festival Caravan of Artists for 2011/12. 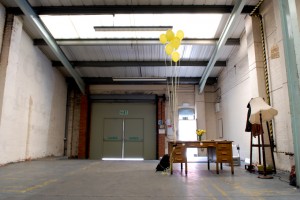 In this room (named ASIA), Lucky PDF, Reynir Hutber and the Secret Show revealed themselves and their practises.

And the secret show is still a Secret Show. Can you keep a Secret? Will you tell us where you live? Will you give us one night of your life? If you are intrigued by these questions please email us the answers at: secretshow@wearefierce.org

Why don’t you walk towards the large screen and stamp your feet. See what happens to the solid box on the screen.

What did you see? Was it the same as me? Each stomp, revealed there was a man inside the box sitting down, a faded illusion.

As you continue your journey around the space, make sure you look into every room, no matter how dark it may seem. 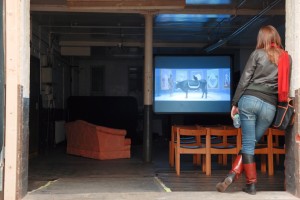 Birmingham based artist Harminder Judge had a presence in this room, have you seen the film The Holy Mountain, by Alejandro Jodorowsky’s?

Harminder asked we show this film as it had become a treasure trove of visual references that has informed the imagery of his own work. 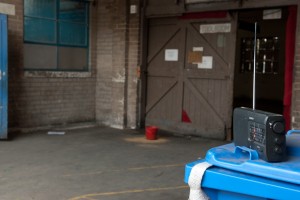 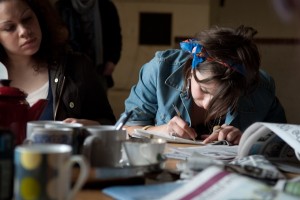 Have you noticed the radios appearing around the building, on a window sill, in the courtyard? Head towards the America’s (the long room/the furthest from from the entrance) and you’ll see what all the noise is about.

Uninvited Guests, a performance group from Bristol are doing a pirate radio broadcast. A circular table, piles of newspapers, a kettle and cups of tea, are before you, they ask you to take a seat and take a look through the newspapers, and find a piece of news that is important to you. “Would you like a cup of tea?”

What was your story? I hope you remembered to write it down on the little piece of paper. Wait till later, this isn’t the last you’ll hear of it.

“Could you all gather in the main room please” Mehmet Sander is about to speak. 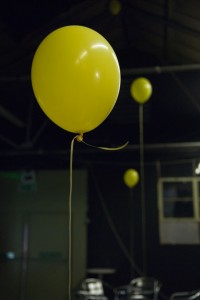 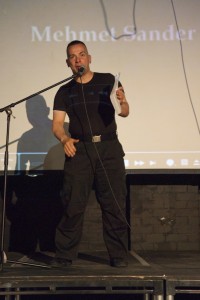 ‘The subjects of each dance are the movements themselves …Music is deleted. The timing of the work stems from whatever patterns are natural to the execution of the task…The use of the stage wings is also omitted. Horizontal and vertical orthogonals are applied to the occupancy of space. Thus, geometric shapes such as the triangle, the circle and the square are used as the performance space. Movement is approached scientifically; like a scientist working in a lab…” 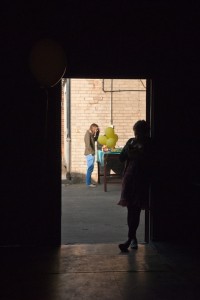 Follow the light and see the courtyard of A.E. Harris. Vegetarian barbecue is in full swing, sauces to accompany, and beer is flowing. 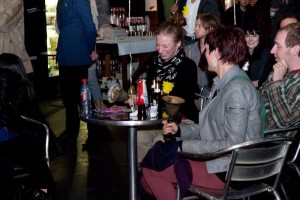 Did you see anyone hiding an object in their jacket? Next is Graeme Miller, a theatre maker, who performs a poetic piece, building up to a finale, where he repeats the word “Belong! Belong! Belong!” At that moment a selection of people open jackets and bags to reveal a bell and begin to ring it with vigor! 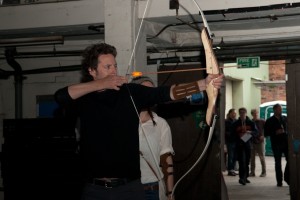 Have you tried archery?

(With a professional bow?)

Abigail Conway of ‘Subject to Change’, with a project called Cupid, ask you to take part in an archery competition, to find the top three archers in the land.

Hanging from the ceiling, a black backdrop in place. 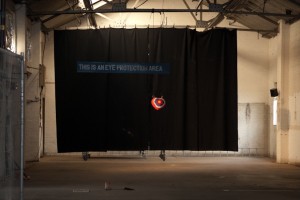 Towards the back of the room, did you notice the other artists’ presence in the space?

As the sun is fading, Uninvited Guests are gathering. Follow them out to the courtyard. 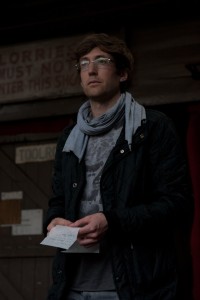 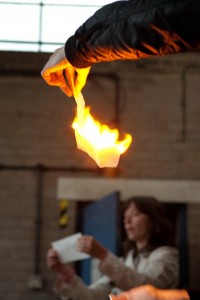 Do you rememeber writing the title of your chosen article on a small piece of paper?

At this point the day’s news according to those present was verbally announced to the audience.  The headlines that held the most significance to those present were written on paper that was ceremoniously set alight and vanished instantly.   For this moment we shared each others poignant moments that now remain imprinted in memories. 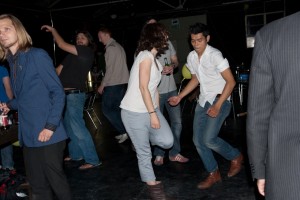 Order your next round at the bar, put your jacket, bag and map down on a table and… 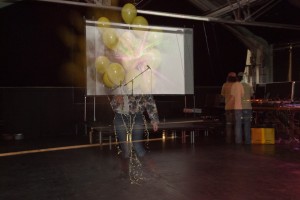 Eloise Fornieles will join you on the dance floor, for a performance piece.

A sea of yellow floats onto the dance floor, gentle movements and the balloons glide in the air. Eloise has a bunch of balloons tied to her, as she moves to the music, intoxicated with sleeping pills.

Leon Trimble will be your DJ and VJ for the evening.

Please don’t stop dancing, even when the music ends!

All photos were taken by Jaskirt Dhaliwal.