I first saw this video at Vivid in an exhibition titled Endurance in 2008. In struck me at the time, and remains, one of the most darkly romantic works of art I’ve seen.

“The video depicts a man, Stewart, wearing a shirt and trousers and lying underwater, in a bath. As he noisily releases his breath and bubbles rise to the surface of the water, a woman, Smith, leans over him into the camera frame and replenishes his breath with air from her own lungs. She withdraws; he lies still holding his breath until his oxygen expires and he has to breathe out again, triggering Smith’s painfully loud and abrupt inhalation and replenishment. The sounds of the artists’ breath have been amplified to provide the sound-track.” (Tate)

The Last Hour from Dan Belasco Rogers on Vimeo.

“Each have half an hour to tell the other and the audience the things they never said, things they remember or would just like the other to know before the hour passes. At the end of each person’s half hour, the chess clocks’ red indicator falls. When this happens, that person can no longer speak and has to wait for the other to finish their half hour.” plan b 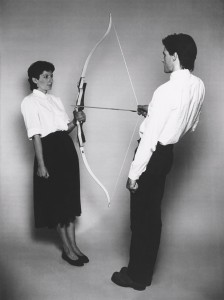