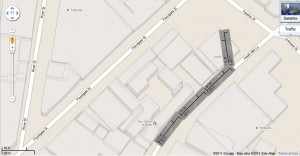 Artist, Eitan Buchalter will make a public intervention amid the flow of pedestrian traffic on Saturday 5th March 2011 in advance of the local derby between Birmingham City FC and West Bromwich Albion on Heath Mill Lane in Birmingham’s Eastside. The precise nature of the work will only be revealed on the day. Buchalter will be expanding on his current body of work exploring how we flow through and interact with public spaces and what happens when aspects of our environment are disrupted. (www.eitanbuchalter.com)

Veer will be broadcast live online at www.thisistomorrow.info from 11.30am Saturday 5th March 2011. Alternatively, you can engage with the work in person by walking along Heath Mill Lane from 11:30 on 5th March.

Eitan Buhcalter is an In Association With … artist at VIVID and a Fierce Festival 2011 artist. His interest in the site originates from his participation in the VIVID curated Endurance festival in 2008. Buchalter graduated from Ruskin School of Art in 2002 and has recently shown work in Tate Modern, Conveyor (2009), Warwick Arts Centre, Mead Gallery, Crossing, (2010). Eitan Buchalter will feature in the forthcoming Fierce Festival 22nd – 27th March with a talk, workshop and intervention.

This project is supported by ACE and co-produced by Vivid and Fierce.