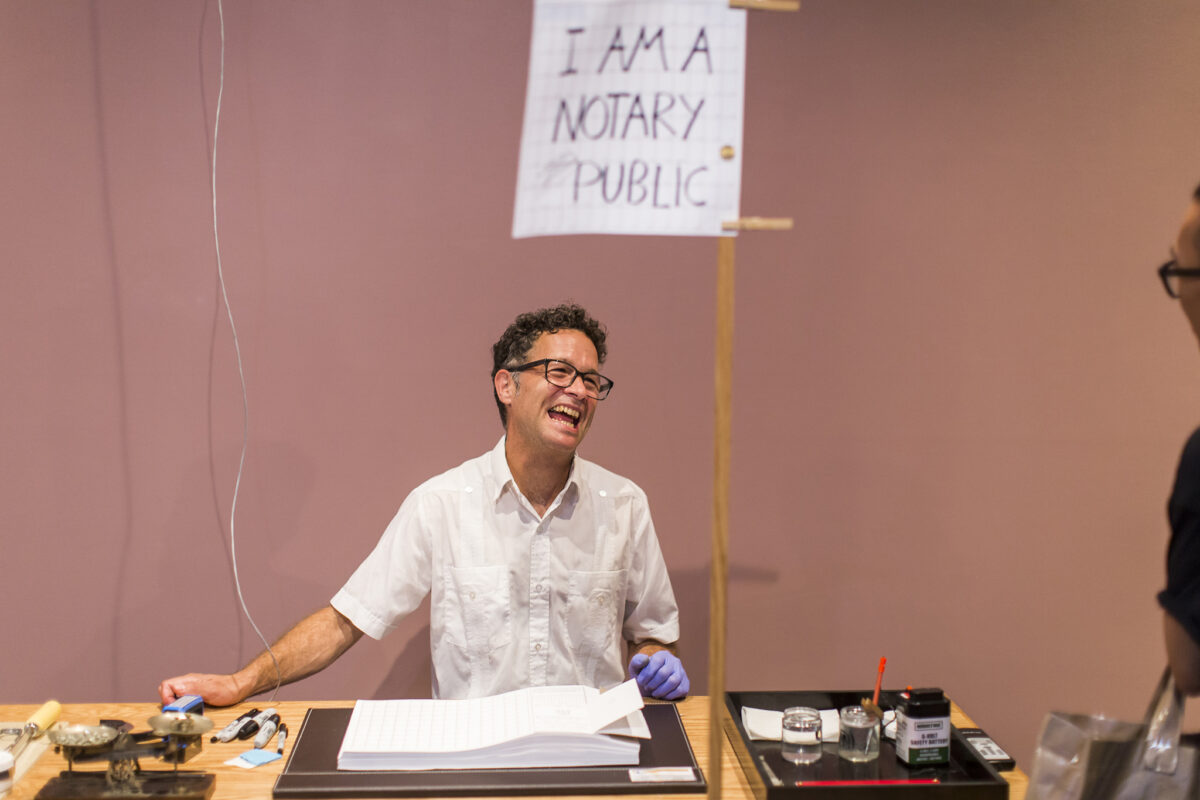 We are excited to announce a free workshop for artists with acclaimed international artist Paul Ramírez Jonas. Fierce will be working with Paul closely throughout 2021/22.

The workshop is called ‘How do we make art?’. The workshop will consider the history of the artist studio; or more exactly how there isn’t a comprehensive history of one, and will show two short videos that contrast different methods of production: Bowerbirds and how they make their nests, and KIVA robots that are used to run a fulfilment warehouse. Before asking participants: How do you make your work?

The workshop is for artists based in the West Midlands with performance, live art, participatory and socially engaged practices. The workshop is free to participate in as part of our ongoing Fierce FWD programme.

The workshop will be taking place on Friday 15th October at DanceXchange studios 4-8pm and will be followed by a social drinks hour. To reserve your place on the workshop email contact@wearefierce.org

Paul Ramírez Jonas was born in 1965 in Pomona, California, and raised in Honduras. He earned a BA in studio art from Brown University (1987) and an MFA in painting from Rhode Island School of Design, Providence (1989). Ramírez Jonas’s work ranges from large-scale public installation and monumental sculpture to intimate performance, video, and drawing, and traces the universal aspiration to an elusive perfect world. From driving west in pursuit of the sunset (Longer Day, 1997), to recreating failed flying machines (various projects, 1993–94) and transcribing the communications of the Apollo space mission (Men on the Moon, Tranquility, 1990– ), his practice is characterised by a bracing, albeit nostalgic, idealism rooted in a faith in human resilience. Sensitive to the processes of globalisation, he reveals its simultaneous tendencies towards interdependence and exclusion.

Exploring the parallels between various public gathering spaces, Ramírez Jonas’s drawing series Admit One (2010–13) and Assembly (2013) chart a typology of assembly halls, churches, cinemas, stadiums, and theaters that underscore the fundamental nature of the human need for connection. In The Commons (2011) and Ventriloquist (2013), the artist revived the monument (here the equestrian statue and the portrait bust, respectively) as a vehicle for communication by replacing the form’s immutable granite or marble with cork—a material that is both degradable and the traditional medium of community noticeboards. Key to the City (2010) was a citywide intervention in which twenty-five thousand keys to private or normally inaccessible spaces throughout New York City were bestowed on certain individuals in a special ceremony, revealing that culture can still be a freely shared experience, while also highlighting the increasing privatization of urban space.