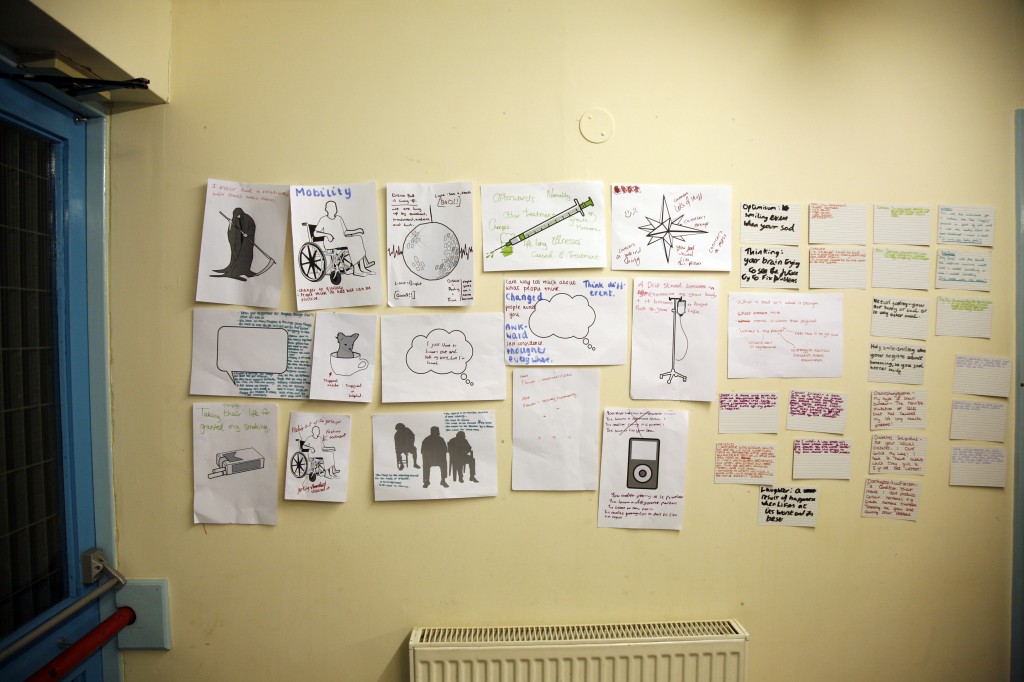 In the run up to the festival, we have been working on a project with artist Brian Lobel and Birmingham’s Teenage Cancer Trust, challenging the taboos and myths of living with cancer.

Fun with Cancer Patients is the brainchild of Lobel, who has spent several months working with patients aged 13 to 21 at the QE Hospital in Selly Oak. Together the teenagers are challenging taboos around cancer and dealing with them head-on in an open and honest way.

Lobel, who experienced cancer as a young man, has devoted much of his career to upsetting lazy perceptions of the illness. He said, “There are so many cliches surrounding cancer, in particular the idea of a brave victim battling against the cancer enemy and coming through victorious. With this project we are getting past all of that, to the heart of the everyday boredoms, irritations and unexpected friendships that are part of treatment and recovery. We are using creative happenings to chart the daily realities of living with cancer, and having a bit of fun in the process.”

In workshop sessions, the group picked out many daily experiences and emotions which will  be the subject of creative happenings, culminating with an exhibition at mac birmingham opening this week.

The beeping sound of the drip-bags was named as a particular and constant irritation, annoying and disturbing sleep. One member recorded the beep on his iPhone. The sound file has subsequently been remixed into a ring-tone and dance tune which will be available to download through the Fierce website in the next few weeks.

Hospital food is another point of interest for the group, in particular how meals have to be chosen the day before from a menu, yet tastes and appetites can change widely whilst being treated for cancer. Working with food artists Blanch & Shock and in consultation with the hospital’s dietetics staff, during August, a team of chefs were called in to create a meal within the confines of the ward, served within an hour of taking the initial order – the group were able to order whatever they chose, so that the meal caters for precisely what their appetite calls for at that point in time.

A new idea to Lobel is that of the ‘cancer friend’, someone who is met within the ward or hospital where the common bond is simply cancer. To the teenagers, the ‘cancer friend’ is one of the few people they would instantly answer the phone regardless of time of day.

In response to this, four teenagers were given an amount of cash and sent out into the city with their cancer friend, taking pictures of their day out together. They then write a short description of their cancer friend, which will be fed back to a psychologist working in this field. It is hoped that the project will affecting the research agenda, providing qualitative data about the nature of friendships and support systems during cancer.

The Fun with Cancer Patients exhibition opens at mac birmingham on 7 September and continues to 6 October. The exhibition presents the documentation of the activities above, alongside reflections from medical professionals. It is supported by the Wellcome Trust.

The exhibition opening takes place from 6-9pm on Thursday 12 September 2013. Please arrive early to ensure you get a glass of Blanch & Shock’s specially made punch!