Welcome to Unrestricted View, a series of written responses to Fierce 2017 from local writers.

Response to the Opening and Demonstrating the World by Chris Ansell 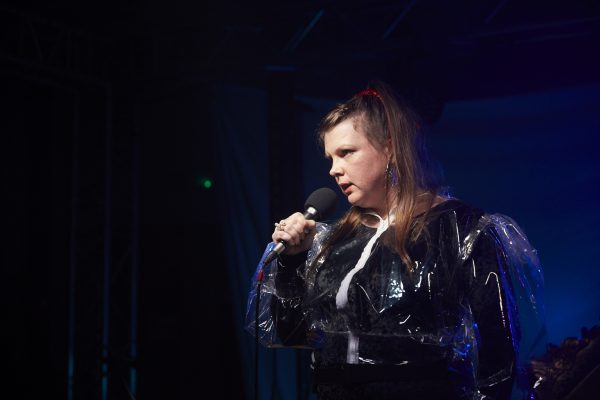 On an inconspicuous night in October, Fierce Festival landed. An opening night of performance and partying set the tone for what was to be an invasion of contemporary performance across the city.

Standing in the Hub, I looked around hoping to bump into somebody I knew. I didn’t. They seemed a friendly enough bunch but after a day working in London I wasn’t really in the mood for making friends. So, I got a bottle of beer and preoccupied myself by looking around the bar, waiting for the first performance to commence.

On the bar tables were scattered some event programmes. I picked one up and had a flick through (partly attempting to look like I was waiting for somebody rather than just being the guy who turned up to the party alone). Five performances were to take place throughout the night and each had a small mention on the double page spread that detailed the evening’s schedule. Each act was mentioned by performance name, artist name, time and a 50 word description.

50 words! That was it! No artist statement or exhibition text just a brief synopsis of the piece. Where was the information? How was I to know what to expect with only 50 words? I looked around as saw no exhibition labels, statements or wall literature. All I had were the 50 words in front of me.

I felt a sigh of relief.

For once, there was no literature or information telling me what to expect and what the work was about. Instead, I would have to wait to experience the work for myself and was given license to realise my own thoughts about each act. Rather than have the work described to me before I had even seen it, I would be free to approach the work with a fresh mind that had not been influenced by background, content or context.

As each act commenced I was presented with something completely new and unexpected. Each provoked a gut reaction; a thought, a feeling. I felt things that I was not prepared for. In fact, I had not been prepared to feel.

As performances progressed my head did engage and I thought about each piece and what it meant. But this was not just a case of connecting the dots between the artwork and the literature. Instead, I really had to think.

It was an exhausting experience – feeling so much and thinking so much – but it was thrilling, and entertaining, and terrifying. And I loved every minute. 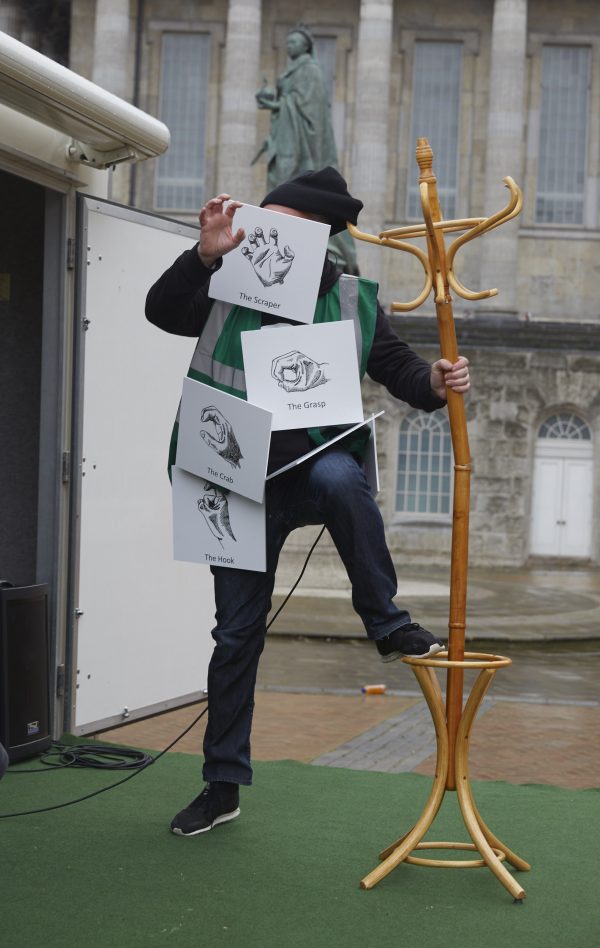 A windy day in Birmingham as storm Brian hits. A trailer sits at the top of Victoria Square, facing the iconic Birmingham Museum and Art Gallery. One side of the trailer is open, its side lowered to form a make-shift stage, and inside can be seen an assortment of props and objects.

On the protruding stage, a man stands wearing black and a green high-vis jacket.

He walks around his make-shift world and goes about daily tasks: watering a plant, taking a hat off, opening a step stall. As he does he addresses his growing audience, explaining his actions through the PA system and wireless microphone headset.

People watch, intently. People watch as he performs the most mundane tasks at a frustrating speed.

Why? Why do people gather to watch, taking time out of their day to watch a man perform tasks that they see and do everyday? There is no introduction to the occurrence, no sign telling them that this is a performance and that it should be watched. Some people may even watch the event for 20 minutes and leave completely unaware that they had seen a piece of art today. So why do people choose to stand, in the wind and the gradually increasing drizzle, to observe the mundane life of a man on the stage.

I think they watch because it makes them feel safe. It is easy to get lost in the performance, in the actions that are simultaneously absurd and mundane. There is something comforting in observing a man complete everyday jobs, in knowing what he is going to do before he even does it.

Perversely, there is something strangely predictable about the performance. In a familiar setting familiar actions are performed. Regardless of the stage or the man who chooses to explain his every action, it is easy to be lulled into a sense of security by this familiarity.

The actions seem to belong to the world and feel much more at home in Victoria Square than Antony Gormley’s sculpture ever did. They seem to be simultaneously part of the world and a reflection of it, mirroring the bizarre world that we live it. A world that is full of so many recognisable motifs but somehow always feels strange.

We have evolved to cope with this strangeness and take comfort in the actions that are recognisable and predictable.

Aaron Williamson’s performance creates a space that is full of recognisable motifs. The stage and framing may be alien but everything upon it is known and comforting. The world that he creates is one of predictability and measured control. The world feels safe, a place for reflection and easy humour. It is a nice world to watch.

Chris Ansell is a researcher and assistant exhibition manager at Birmingham City University. He studied fine art at the Birmingham School of Art, Rome University of Fine Art and Oxford University. As an artist and curator, his research is concerned with the relationship between literature and exhibition practices.